What Every Woman Needs To Know About Being Roofied 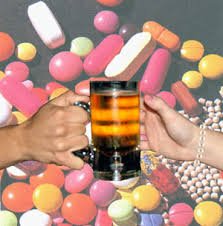 Coachella starts this weekend, and if you’re headed to the massive week-long music festival, safety is likely top of mind for you and your fellow festival-goers. Last week, a video of a young woman at an outdoor festival went viral, because you could clearly see someone drop something into her drink as the music plays. The Twitter user followed up to say she was okay, but unfortunately, this scenario is still all too common.

"My coworker and I were splitting a pitcher of margaritas and some guac at a rooftop bar, and a guy at the table next to us accidentally elbowed me in the head — or so I thought — and then, very jovially, said he’d buy us a round of shots to make up for it," Kristina King, a 24-year-old living in New York, recounts of the night she was unexpectedly roofied. "He came back a few minutes later and set a shot down in front of each of us."

Just minutes after taking the shot, King blacked out and can’t remember anything that followed. Her coworker told her she was "acting drunk" but not unreasonable, and told her that after they said goodbye, King took a cab home.

"My next memory is waking up in the hospital, covered in vomit, with an IV in and no recollection of how I got there," King says. She walked home at 4 a.m. with a broken phone and no memory of how the night went.

It's possible that King was non-consensually drugged using Rohypnol, a common date rape drug traditionally known as a "roofie." It's illegal in the United States, but that doesn’t mean it’s difficult to come by, especially since it's relatively cheap — it's reportedly sold for less than $5 a tablet. (Though nonconsensual drugging isn't always via roofies — other drugs, like Ketamine ("Special K") and GHB ("Liquid Ecstasy"), are also common.)

When ingested, Rohypnol causes sleepiness and amnesia, which is why people may wake up and not remember what happened, Rana Biary, MD, explains. "It functions very similar to Xanax or Ativan," she says. All of these drugs are benzodiazepines, sometimes called benzos, which essentially function as sedatives.

We asked a few experts about what people should know about Rohypnol — and what to do in the event that you or someone you know gets roofied. To be totally clear: If someone drugs you, it is absolutely not your fault in any way, and there's no foolproof way to ensure that it never happens. But it's also true that there are a few smart strategies that may reduce your risk. It's shitty that we have to keep these things in mind, but that's the world we're living in. Ideally, rape would be prevented by people not drugging and raping other people.